One of my biggest inspirations in life, as a woman and as a lover of all things democratic, comes in the form of the WSPU- Women’s Social and Political Union.

In the late 1800s and early 1990s, the NUWSS (National Union of Women’s Suffrage Societies) were actively making peaceful attempts to expand the rights of women in the UK, specifically by demanding that they have a right to vote. Millicent Fawcett led this group of mainly middle-class, educated women in a bid to achieve civil rights through meetings and parliamentary bills that had the potential to change the future for women forever. I massively respect this group since they inspired their generation to seek change and fight for what they believed in. However, in other parts of the country, the north specifically, women were becoming increasingly impatient with the ‘suffragists’ who were having little success. One of these women was Emmeline Pankhurst, a Manchester-born activist.

Emmeline was born to politically-active parents which suggests some of the reasoning behind her political interest, and married Richard Pankhurst, an older man known for his supporting of the women’s suffrage movement. She became involved with the movement at just 14 years old and continued this activism until her death, aged 69. When frustrations grew with the London-based NUWSS, Emmeline and her daughters founded the WSPU on the 10th October 1903, an organisation dedicated to DEEDS NOT WORDS, a phrase symbolising the importance of action over empty promises. Although the group was criticised for their militant tactics and often violent campaign, they are known for playing a very large part in achieving the right to vote for women in the UK. I don’t condone violence but in a patriarchal society that had no interest in the voice of women, in my opinion it was the only way to have any significant effect. 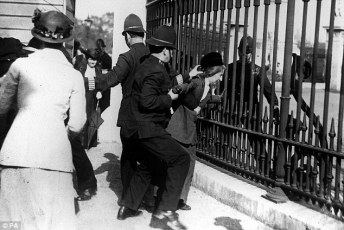 The government and male-dominated press made many attempts at oppressing the campaign also which provoked a more noticeable response. For example, the media lost interest in the movement and stopped publishing things that would work in favour of them and even against them. The government simply ignored their requests for the vote. The campaign had to be stepped up in order to have any effect. Heckling became a major tactic and despite compromising the reputation of women as ‘over-emotional’ and ‘out of control’, it certainly took effect. For example, on 13th October 1905, Christabel Pankhurst (Emmeline’s daughter) and Annie Kenney  attended a meeting where a minister in the British government would be speaking, Sir Edward Grey. Whenever Grey spoke, both women heckled him and called out:

“Will the Liberal Government give votes to women?”

The police were called to evict them from the meeting. Both women refused to leave and during the struggle and they were both charged with assault.

A few weeks ago, I got my first major tattoo, and I take great pride that I chose to dedicate it to this group and the movement which got me to where I am today as a young woman in education with a thousand opportunities in my future. 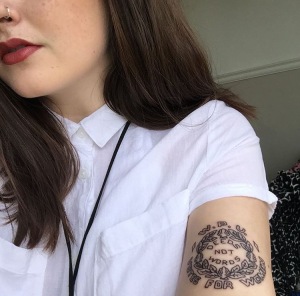 Here is some facts about the WSPU and the suffragettes:

-The phrase ‘suffragettes’ was coined by the DAILY MAIL, an term of mockery to describe militant female activists and differentiate from the suffragists- the women of the constitution.

-When suffragettes were sent to prison for their militant activism, they often went on hunger strike. When women became close to death or even died in prison, the government realised their reputation and their side of the debate was at stake and so began force-feeding them. To stop the need to force-feed, they began releasing women temporarily when they became so weak with hunger, so if they died they wouldn’t be in the prison and the family could nurse them back to health, before bringing them straight back again. This was known as the ‘Cat and Mouse Act’ because it was just an endless cycle of women coming in and out of prison.

-The WSPU was represented by 3 colours, green, purple and white. Mrs Emmeline Pethick-Lawrence, treasurer of the WSPU in 1908, famously described their symbolism:

“Purple… is the royal colour… It stands for the royal blood that flows in the veins of every suffragette, the instinct of freedom and dignity… White stands for purity in private and public life… Green is the colour of hope and the emblem of spring.”

-Suffragettes had their own symbolic jewellery too, many of it designed by Sylvia Pankhurst, the marketing genius behind the campaign. Some jewellery represented dedication to the movement, whilst other pieces showed actions of the individual, such as a silver hammer, worn by those who smashed windows.

-Opposition to the movement was immense and the propaganda created by anti-suffrage movements was in full-flow by the turn of the century. Suffragettes were often depicted as  ugly, masculine characters with the inability to mother children or to control their emotions. In contrast with the typical representation of women at this time to be pretty and pure, this had huge effect. 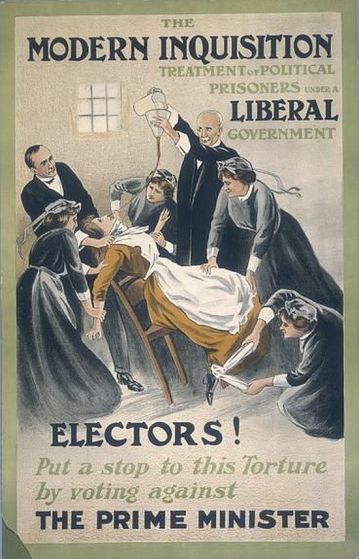 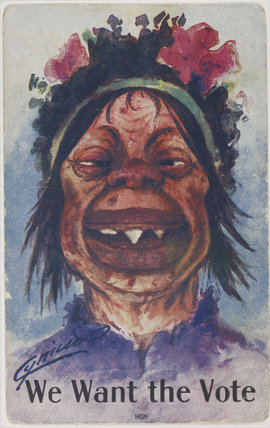 My name is Beth and I’m a 23 year-old creative living in Manchester.

I’m a passionate Northerner who loves all things books.

Here you can find reviews, musings and anything in between.